Hi.
I need help. I have DirectAdmin on my VPS.
How can i install LibreTime which would not go into conflict DirectAdmin (httpd, php).
DirectAdmin using httpd, not apache, but if i install ./install -fiap.
This installing Apache Web Server which using same port like httpd.

What is better way to install LibreTime?

My server using next services (picture).

You would either need to run Apache on a different port and configure it or a probably more difficult endeavor of getting LibreTime to work with httpd (I’m assuming that is ngninx ?) Or it could be that you are running on centos. There will be a lot of additional resource usage running LibreTime on the same box because it will install postgresql as well.

I’d suggest that it might be a better idea to run LibreTime on different hardware or via Docker.

Apparently httpd works in ngnix. And I think it’s too complicated to rebuild this httpd. It is better then already on apache and just change the port to apache. I’m using Ubuntu 18.04. Unfortunately, I can’t deploy more VPS machines than the Raspberry Pi 3B +, but it would still be better in terms of performance than a VPS.

Should I still install the VPS after installation?

So I suspect that you will run into resource limits running both nginx & apache and mysql & postgresql on a RAM limited environment like a Raspberry Pi 3B+. You could give it a shot but I’d back up everything before doing the install because it might overload the system. In theory LibreTime should work with a different Apache port but you might want a separate Raspberry Pi to run LibreTime vs. sharing it with another web system. It all depends upon load though and I think the first constraint would be memory.

Would you rather introduce Raspbery Pi3?

Not sure I fully understand your hosting/server situation, I think that some people have reported getting LibreTime working on Raspberry Pi 3s. If you had a spare one it might make a easy way to get it up and running but you would still need to figure out DNS, portforwarding & accessibility in general to the Internet to get it working outside of your local network (if you are hosting at home or behind a router).

Is there an exact guide for Raspberry Pi to install the whole thing?

If I borrow raspberry from the site to download the latest lite version and run raspberry pi on it, I would like to get the whole thing working the first time, not all the possible errors.

Accessibility would not be an issue or DNS, but the concern is whether there is a correct guide to get LibreTime to work on Raspberry Pi

Sorry nobody has written a complete guide for Raspberry Pi 3 - I think it might work based upon people’s reports just with the latest Raspbian based upon Debian 10 out of the box. I’d try the latest github image with python 3 if you wanted to test it out. It’d be a good piece of documentation to have, we are always looking for contributors in this department.

I would definitely be willing to give it a try, and I will probably take that journey then. Do you have any suggestions for me?

Just install it the normal way and if anything isn’t working post here for help or with the workaround. If it just works then you can confirm that and/or write some documentation and open up pull request so that we can add either a note highlighting that LibreTime works on Raspberry Pi’s out of the box or else specific install instructions.

i found one issue. 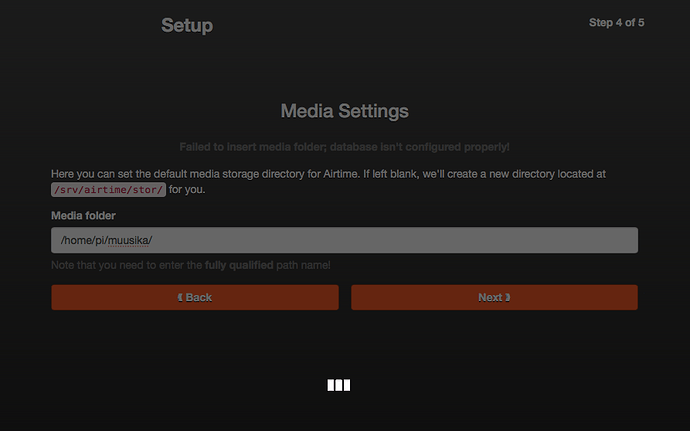 Hmm weird, wonder what is happening, anything in the /var/log/apache2/error.log ? If you reload what happens, does it get stuck here every time ? Also check your JavaScript console on your browser.

I give you some pictures, maybe you find a problem

I think the bug is that the code that parses the rabbitMQ settings and /etc/airtime/airtime.conf file is freaking out because of a ! character in your password. At least that is my guess based upon the logs and looking at what that file is. So sounds like we could open up an issue with how we are parsing that file. If you don’t have a ! in your password then I’m not sure you could look at /etc/airtime/airtime.conf to see on that section of it. But otherwise try setting a rabbitmq password w/o special characters and see if you run into the same problem.

yeah, i trying again and special charset take that

Do you know how to translate all libretime?

LibreTime is translated through .po files for each language we support. Find the one for the language and you can translate it. You can also open a PR and share your translation on github.

Where can i find .po file?

airtime_mvc/locale/LANG_CODE/airtime.po
Basically find the code for the language you are seeking to translate further. If it is a new language then I’m not sure the exact steps but most likely you just add the LANG_CODE directory and create an airtime.po

I’m not 100% sure if there is an additional step you need to do afterwards.

Were you able to get the install working ? If so I’ll have to open up a bug for the installer to fix the issue with special characters.